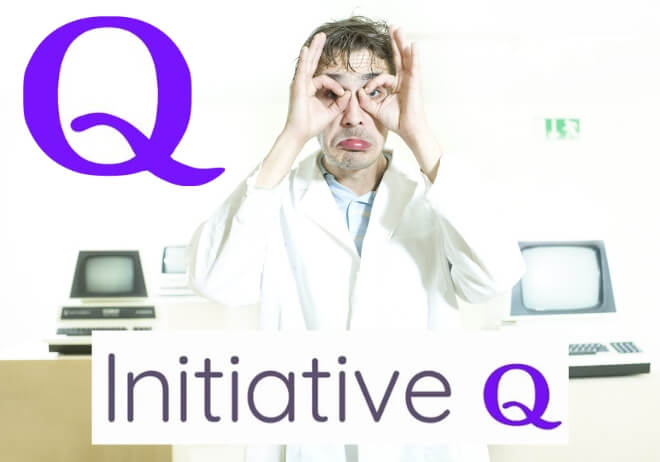 Most people on social media and especially those involved with cryptocurrency have been exposed in the past few weeks to a new digital currency project “Initiative Q” that hands out “free” money. It has been going viral, claims NOT to be a cryptocurrency but yet compares itself to Bitcoin 7 years ago. So what is it then? Is it legit? Is it a scam? And is it indeed going to compete with cryptocurrency or the legacy financial system?

First of all: it doesn’t cost any money to join and they are not phishing for sensitive financial info or private keys so that makes the probability of it being a true scam at least significantly lower. The mentioned founders seem real and with a legitimate background: one is a serial entrepreneur that has in the past founded a payments security company that was bought by PayPal for which he worked 2 years as well. The other is a professor in monetary finance and also seems to have a reasonably scientific background in economic study. Their information is in the public and they have a decent background, so we are off to a good start. Last point: they do know about viral marketing, because their campaign went from nothing to insanely viral in a matter of just a few weeks.

So what is their project about?

They claim to be an experiment where they aim to implement a revolutionary modern payment network with its own native digital currency that should replace the legacy fiat system, while at the same time not being a cryptocurrency. They want to achieve mass adoption by distributing the largest part of their token supply for free through their massive invite-a-friend viral marketing campaign on social media. The system is not there yet and still needs to be developed, still they want to see first if enough people would adopt it. As they say: if enough buyers in the marketplace want to pay with the currency token and enough merchants wish to accept the token, then mass adoption will succeed automatically and the value of the token will be naturally established.

According to their theory the value of any form of money, and thus of their currency as well, will come from the formula of monetary economic theory: MV=PT. This formula reflects that the larger the economy of a currency is, the higher the value (if the money supply and velocity remain stable). The formula MV=PT essentially says that the amount of currency units (“circulating supply”=M) multiplied by the number of times it changes hands (velocity=V) is equal to the price of goods and services produced (P) multiplied by the number of trades (transactions of buying/selling goods and services=T) made. So if the economy grows: P*T, and the supply of currency and velocity stay the same, by definition the value of each currency unit will grow. In economic theory this can’t really be disputed. However, the critical issue is of course that consumers and merchants must have trust in the stability and durability of the token and its related payment network – at least enough for merchants to start accepting payment in the Q-token.

They want to initially distribute 2 trillion tokens, that they expect (by using the MV=PT formula), that on world-scale adoption, each token would become about $1 of value.

Are there red flags?

Well it does have some red flags that are usually also quite noticeable with scams:

How does the company get funded

Currently it seems they don’t have significant funding (yet) and they are not planning to sell tokens soon for funding. However if they achieve their goals by getting enough members on their platform, they might find enough traction to be able to sell tokens at a “discount” (less than $1) to accredited investors to receive desired funding to be able to implement their roadmap.

To be honest: no, I don’t believe it is a scam in the strictest sense of the word, but I do categorize it as semi-shady considering its aggressive tactics exploiting on FOMO. And as a supporter of the cryptocurrency ecosystem I consider Initiative Q an opponent and therefore out of principal I won’t be signing up. Also, because I believe the chance of this project succeeding in its overly ambitious goals are almost negligible, I am not the least worried about missing out on anything.