What is FOMO3D? Is it a scam like BitConnect? Or a legit game? 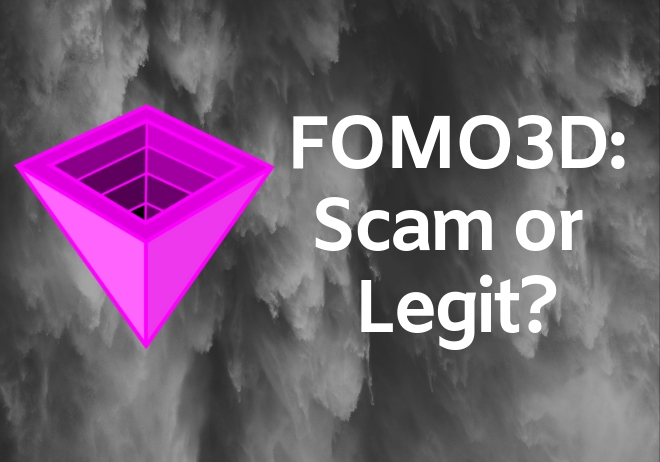 If you haven’t heard of FOMO3D (F3D) or POWH3D (P3D or Proof Of Weak Hands) yet the chances are that either you live under a rock or you are a casual retail investor like me. These Dapps (Decentralized apps) have caused a rift between crypto-enthusiasts in the know, with some calling them BitConnect 2.0 and others stating that they are simply misunderstood games.

Either way, when there is money to be made, it’s usually followed by a large amount of hype. This hype stage is where we are now… The reason for the hype is the prize pool of ~21,702 ETH (at time of writing). Prompted by the hype around both Dapps, we decided to investigate and try to discover if this is really the next BitConnect waiting to exit scam or whether there’s more to it.

During my research, I spoke to CryptoKnight (supporting dev and creator of the Wiki), Justo (Founder & Lead Dev), as well as some other people who’ve found success and failure. This will not be a quick read, but it will be detailed and hopefully informative. I hope you stick with it and read to the end, you might be surprised at what you learn.

FOMO3D is a parody of the cryptocurrency space as a whole, namely the seeming requirement of all ICOs (initial coin offerings) to run off with large amounts of unaccountable cryptocurrency.

Let’s start at the beginning, shall we? FOMO3D is the latest Dapp game to be released by the JUST team. At its core, it is a lottery game. You buy a key for a value in ETH and that ETH is added to the prize pool. If you are the last person to buy a key when the timer runs out, YOU WIN! Sounds simple, right? It is a little more complicated than that and we can go into that a little later in the article, but for now that should suffice.

What is interesting to know is that the whole game is run by smart contracts, NOT by humans. The contract handles everything from the money coming in or out of the game, the timer, distribution of winning, and passive income to key holders. This means that there is no-one with the power to run off with your money. Hence no exit scam, even with the rather comedic domain name of exitscam.me.

So, lets discuss the team a little. The team behind FOMO3D is continually growing, with members being hired from within the community. The core team consists of four members Justo (founder & lead developer), Mantso (lead developer), Inventor (Solidity programmer), and Sumpunk (Web developer). According to the wiki information, the four met on Discord and Justo added them to the core team as they became more and more involved. Other than that, very little is known about any of them.

Why all the hype?

So why is everyone talking about FOMO3D suddenly? There are three key elements that have contributed to F3D being talked about so frequently:

All these elements come together and have contributed to making both F3D and P3D some of the most successful Dapps on the market. Whilst referrals are not uncommon throughout exchanges, ICOs, or other crypto related enterprises, it does feel somewhat Pyramid-scheme-like in this instance. On the other hand, how often have we spoken to friends and family about lotteries and other contests? Does it only feel scam-like because its crypto?

Is this the next BitConnect waiting to happen?

This is an interesting question. We can start by understanding BitConnect.

BitConnect was a pyramid scheme and a lending platform, in which users invested their cryptocurrencies, which were quickly converted to the native token BCC, and users were paid interest on their investment. Well, that’s what should have happened. But after a short amount of time BitConnect suspended operations and disappeared with users funds.

The focus of their platform was to utilize the referral system to earn more dividends, and a referral bonus from other users. Sound familiar? Early on people were receiving the promised pay-outs and withdrawals were not an issue. So, this made recruiting new users easy. But when withdrawals were locked and the site was taken down, withdrawals became impossible. This is where F3D and P3D differ from BitConnect. As these Dapps are controlled solely by code within a smart contract, withdrawals can not halted and should the website be taken down or blocked, users can interact with the code directly, assuming they know how to. (Explainer article)

Another difference is that BitConnect was a lending platform in which users were promised interest on their investment. The focus of F3D (and POWH3D) is a lottery in which by increasing awareness and referring people to the game, liquidity is improved, price rises, and dividends are paid out.

Only you can make the decision of whether you think it is shady or not. DYOR! Sure there’s elements of these games that seem a little off – anonymous team, MLM referral system, and an expectation that the code is trustworthy.

And while smart contracts are more trustworthy than your average human, they are by no means infallible. All it takes is one enterprising hacker to find a small error or workaround, and everyone’s money will be gone. We’ve seen this happen many times in recent history…

There happens to be an article in circulation about a suspected exploit that is already being taken advantage of. (How to PWN FOMO3D) But what I find really interesting is a comment on the article by a user named “ProbablynotaRussian” where he claims the exploit was discovered by the team and given to the community to use at will. This means that you can interact with the code directly using Metamask for a chance at FREE ETH. (Gohan Mode) I even tried it out myself… no luck though. So, considering these points and their transparency about the exploit, they seem pretty legit to me.

How does it work?

The premise of the game is simple, the rules of the games (below) have been taken directly from the Wikipage:

When a person buys a key, they can choose one of four teams: Snek, Bull, Whale, Bear
These teams decide how the pot is broken up and distributed to users – either via airdrop or at the end of the round. This is explained as:

This table explains the breakdown of incoming ETH (money from the purchase of keys).

As you can see, passive income is key! And this is even more relevant when you consider P3D takes a 10% cut of all buy/sell orders and distributes that amount to all P3D holders.

Now for POT distribution. 48% of the prize pool will always go to the outright winner (going on the current prize pool that would be $4,500,000 approx.), and 2% goes in a community fund from which the team and other contributors are paid. The remaining 50% is broken up and distributed as per the following table. When the timer finally runs out on F3D, the winning team (team with most users) determines how that pot is distributed to the winner and other players, because even if you don’t win, you still win something…

I know it’s a little confusing but hopefully my explanation makes some sense.

So, you can glean a lot about a project just by joining its social media channels: Telegram, Twitter, Discord. I decided to reach out to users on Discord to get some stories from average users.

I wanted to get some success stories as well as contact users who aren’t as pleased with their experience. As you can imagine, unhappy users were a bit difficult to find on the official F3D channel. However, I did manage to connect with one displeased user who, for this article, will be called Smoking Man.

Smoking Man, points out that censorship is rife within the Discord channel, with anyone discussing the benefits of other similar Dapps being insta-banned. While this isn’t unheard of, cryptocurrency is supposed to be about decentralization and transparency, so the moderators censoring public forums seems a bit hypocritical. Smoking Man did also say “I like P3D, I like the idea, I love all the new Dapps – I just think the reality is a lot further then is shown in Discord”.

It was a lot easier to find people that had a positive experience.

@Swizz, “I eventually dropped another 100 bucks or so in on the run up to 20k. and then the market hype died down. Even crashed…seeing the dividends disperse even when there was a selloff have me enough confidence to leave my money sit and I’m glad I did”.

Another quote from @Swizz “I think anyone who enters this ecosystem needs a holding in P3D. I don’t think it’s too late because they are always thinking ahead of the next release. This dev team has been the group that puts out the contracts that get cloned”.

I also spoke to @Matterhorn who suggested “Get a really good understanding of what you’re investing in before buying any of these tokens”. And that’s very sound advice for anyone interested in these Dapps. It’s interesting to note that I didn’t speak to anyone claiming actual realized profits over 10-20x. The people I spoke to have a very level-headed approach to the games and were far more interested in a long-term passive return.

After all the research I’ve undertaken, I have concluded that while all the branding of these games screams pyramid/Ponzi scheme, that is all part of a clever marketing ploy, to gain attention from the media and generate hype. This is by no stretch of imagination a get rich quick scheme, it’s for extremely long-term investment with small yields, but those small yields could amount to large sums over time.

There are elements about these games that I do find questionable, namely that the real point of all the games is to generate dividends for P3D holders, which isn’t an issue as long as your one of those holders. I spoke to Justo the founder of P3D and F3D on Discord when asked why he created the games he responded:

“P3D was built as an experiment in a new type of token mostly as a serious joke, one that ironically broke cryptocurrency rules and allowed people to play cryptocurrency differently than they already have. Our games do not follow the rules in cryptocurrency they never will. Because crypto does not realize tokens can do anything, there are no rules. Too much of the space is copycats for that potential to be realized for example”.

I will conclude this article by saying that I intend to do some more research on the Dapps, but I do have an interest in investing in P3D. However, I am NOT recommending that anyone else should do the same, simply telling you the decisions that I have made after investigating the project. I encourage anyone that has stuck with this article all the way through to do your own due diligence. Hopefully you’ve enjoyed this article somewhat and found it informative.

Thanks, you for taking the time to read this article throughout.