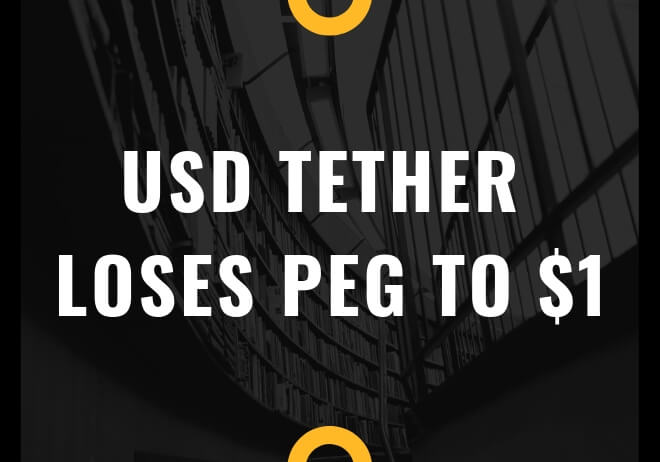 USD Tether (USDT) has been a news article topic quite frequently now, but market circumstances today forced us to pick up the topic once again! Due to recent FUD (Fear, Uncertainty & Doubt) around Tether and Bitfinex (about which we reported recently as well) accumulated with more FUD today, made the market lose trust, which led to investors panicking and trying to get out of their USDT positions, causing crypto prices to go up (with large premiums for Bitcoin on Bitfinex and Binance), but also a premium on competing stable coins. You may ask, what has led to this unusual situation; because usually USDT FUD doesn’t lead to such extreme circumstances? And, will this have a longer lasting impact on USDT, now that its price went so far from its peg with the USD?

Many believe that the recent FUD around Tether and Bitfinex that circled in the last 2 weeks combined with some FUD (including Fake News) was the poisonous cocktail that made investors lose their trust in Tether after so long and made the domino stones fall far enough to break Tether’s peg. Tether and Bitfinex have for long been under heavy scrutiny in the crypto community, because they are affiliated to each other and there are still no full, complete and official audits of its bank balances (besides a snapshot of the 1st of June, 2018, which is insufficient proof of funds) to proof that its fiat balances match its USDT coins in circulation. This situation keeps market participants in uncertainty if the coins are indeed fully backed or that they have been printing unbacked tokens (of which they are being accused by several parties within the crypto space). Read more about the background of USDT here.

What was the recent FUD up until today:

This fake news in combination with the Kucoin announcement coming on top of the already recent FUD in circulation made investors lose trust in USDT and a “bank run” started on Tether, where investors tried to buy other cryptocurrencies or convert in some of the recently listed alternative stablecoins (read more about those in this article).

The following most notable events occurred:

Even though the crypto market is significantly up, market circumstances have not yet been normalized, as BTC still trades at a large premium on Bitfinex and Binance and the other stablecoins are still at a 10% premium, which means traders are paying around $1.10 for each $1 of stablecoin to swap their USDT.

It is unclear how this situation will evolve, especially now that the peg of USDT is definitely broken, which is one of the most important properties of a stablecoin. Question remains if investors can ever trust USDT again now that it has severely failed in its basic function. It seems the only way to restore such investors’ confidence is if there will be a full and complete, official audit as a real proof of funds. Otherwise it is very likely that other stablecoins will quickly gain market share and that exchanges may speed up by opening more trading pairs against these alternative stablecoins.

It is hard to predict what will happen to Tether’s value in the shorter term under these very unique circumstances, but if trust indeed is permanently damaged, then it might be hard to prevent a further decline of USDT combined with a further increase of cryptocurrencies. Today has at the very least severely harmed USD Tether’s reputation, even if that doesn’t lead to a further decline of its price. Crypto investors will have to be very careful under these very uncertain circumstances, especially when still holding funds in USDT. We can’t give any financial or investment advice obviously, but market circumstances are currently without any doubt much more risky. We wish every crypto holder/investor/trader a lot of courage and wisdom.