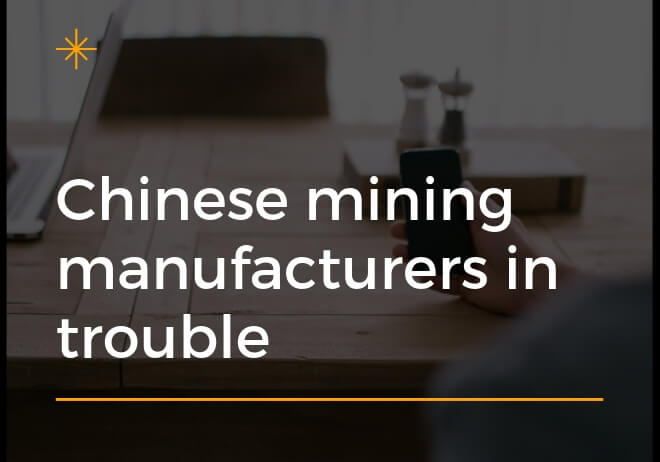 As the US continues its trade war with China, since June crypto mining manufacturer Bitmain’s Antminer S9 was categorized as “electrical machinery apparatus”. This means that Bitmain’s ASIC miners are now subject to 30% import tariffs, where previously existed non, because Bitmain is based in China. (ASIC miners are mining equipment that is specifically designed to mine Bitcoin as efficiently as possible.) The price for these miners are therefore expected to increase significantly in the short term for US customers. And that doesn’t look very well for Bitmain’s revenue perspectives, as it is also trying to raise (reportedly) $3 billion from investors in an IPO later this year. In our previous article you can read more about Bitmain’s IPO plans.

As can be expected, especially in the current downtrending cryptocurrency market, even higher prices for mining equipment would make mining demand from the US, in combination with higher tariffs, much lower. The US market has been quite important for Bitmain, especially since the 2017 bull market rally, where Bitmain was able to expand its business to US territory. As long as the trade war between China and the US continues, revenue and profit are likely to come under even more pressure.

Other China based miner manufacturers, Canaan and Ebang, also have IPO aspirations but they seem to have relatively smaller percentages of their shipping going towards the US, so they might feel less impact from the new tariffs. However they might still be affected by the overall slowing down of the demand for miners.

For Bitmain however, due to increased competition, higher import tariffs and decreasing general market demand, repeating its 2017 success might be very hard to achieve, unless against all odds they are able to make another scientific breakthrough and releasing a new innovative miner that leaves the competition in dust. However there seem to be no signs of such a breakthrough to happen in the short term.

On top of the bad news about the imposed tariffs related to the China-US trade war, Bitmain’s main supplier of chips, Taiwanese chip manufacturer TSMC is expecting even lower demand for cryptocurrency miner chips for the 4th Quarter of 2018. It reduced its revenue targets accordingly.

The cryptocurrency bear market and consequently declining cryptocurrency prices have resulted in decreasing profitability for miners and therefore the supply chain of miner manufacturing is now suffering decreasing demand of their products. This trend has been in effect since Q1 2018. However, interestingly enough, contradicting the normal understanding that lower crypto prices, result in less miners, result in lower hash rates (that define the difficulty+electricity cost of mining; less miners=lower hashrate = lower cost of mining), currently the opposite is occurring: despite the fall in crypto prices (and thus the profitability of mining) and the decrease in demand for mining equipment, since the start of the bear market in Jan 2018, the difficulty of bitcoin mining is still in an uptrend. This also means the negative effect on mining profitability must be even higher.

The general theory behind this curious development, is that the delivery time of mining equipment has been many month as of ordering. Obviously at the end of 2017 and early 2018, demand for mining equipment has been extremely high, but with orders delivered only months after (when the bear market was already in full swing). This means that those new miners could only be deployed far into the bear market, which could explain that the hashrate has still been increasing. New miners apparently choose to mine, even at a loss, potentially HODLing their mined bitcoin for longer term. We will have to wait and see how this will eventually develop, but if less miners are sold for a longer period of time and crypto prices remain low, you would expect eventually hashrate to decrease after all. It might then indeed be that hashrate is lagging crypto market price trend and eventually hashrate.

For reference, the recent Bitcoin hashrate graph from Blockchain.com: