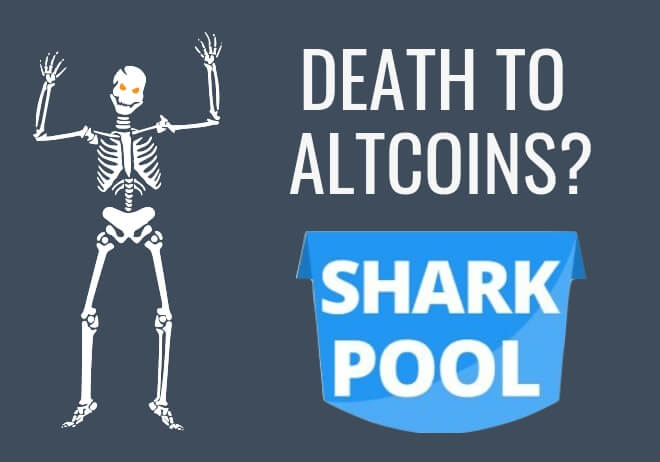 In the midst of all the drama surrounding the upcoming Bitcoin Cash hard fork, a controversial new initiative came out called SharkPool. This initiative basically wants to organize mining hashpower to attack altcoins because they are considered “acts of war” against the “real” Bitcoin (BCH). Craig Wright may have inspired this effort when he threatened to collect mining hashpower to attack the other side of the Bitcoin Cash chain split (Bitcoin ABC) – you can find his exact arguments on his Twitter and on Tone Vay’s recent video.

What is SharkPool all about?

They are basically a mining pool that will use their collective hashpower to attack the networks of various altcoins and ICOs. They will do so by mining empty blocks (include 0 transactions) on those altcoin networks, and then immediately sell the coins they receive for block rewards in exchange for Bitcoin Cash (BCH). Their goal is twofold: 1) hurt other coins price by lowering the buy pressure and 2) disrupt network by increasing # of unconfirmed transactions (and potentially clog it up by spamming their own transactions as well). 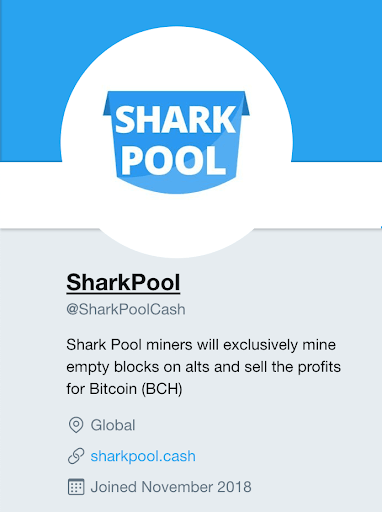 On their website, they welcome other miners who agree with their vision to join their pool. They plan to take a 0% pool fee and to distribute 100% of block rewards back to miners (in BCH). This is different from most other mining pools who do take a fee for their time spent organizing and maintaining a pool. That’s why it seems like they aren’t doing this for monetary reasons, rather to obtain their philosophical vision.

The company CashPay.Solutions are behind SharkPool. They provide payment products/services for the Bitcoin Cash ecosystem. Specifically, co-founder Ari Kuqi tweeted a while back the following:

This initiative should only help Bitcoin Cash (or the version that they support at least), since it will create constant demand for BCH. Also, SharkPool will enable people with hardware that mines other coins to obtain Bitcoin Cash way more easily. We don’t know if there will be market demand for such a niche service, but time will tell.

Smaller altcoin networks without a lot of hashpower should potentially be worried though. If SharkPool is able to collect a comparatively large amount of hashpower, it could keep mining empty blocks and make the unconfirmed transactions start to pile up. End-users for that altcoin would experience higher fees and longer wait times – just like when Bitcoin and Ethereum were at peak usage during the latest bull run. Furthermore, if someone decided to spam transactions while empty blocks were being mined, they would exacerbate the problem even more. Less robust blockchain networks could screech to a halt.

Also, if those altcoins do not have a dynamic difficulty adjustment algorithm such as the EDA, the negative impact could last even longer. Let’s say that SharkPool points their large amount of hashpower at an altcoin network and starts mining empty blocks. Eventually, the difficulty adjustment algorithm would kick in and it would make it harder to mine future blocks (until the next adjustment period). That’s when SharkPool can move their hashpower away to attack another network while keeping the previous one crippled for the time being.

For many reasons though, SharkPool’s impact may be limited. First, they will likely have to focus on attacking one coin at a time. So while a coin may suffer for a period of time, they could eventually recover while SharkPool moves on to attack another network.

Second, many altcoins are mining empty blocks already. That’s because there’s not a lot of adoption or usage for most coins in the crypto world as of right now. So therefore, all it would take is 1 or 2 “legitimate” blocks being periodically mined by a non-SharkPool miner to clear the queue of unconfirmed transactions for that particular altcoin network. If this is the case, the SharkPool’s impact wouldn’t be that significant.

Third, it is definitely not economically efficient to sustain SharkPool’s type of attack. By not including any transactions, SharkPool would be forgoing all of the transaction fees that they would otherwise gain by mining properly. Furthermore, their attack on a coin’s network may cause that coin’s price to drop heavily. Finally, their attacks would have to be focused on a specific coin for a prolonged period of time in order to be effective – they would not be able to switch between many different coins to maximize for block reward profitability. Mining is a business at the end of the day. You have electricity costs and other bills to pay as well. By operating under a less than optimal profitability strategy, SharkPool may not be able to sustain itself indefinitely.

As you’d expect from a decentralized crypto community, the reaction is largely mixed. Some people see this as a hostile action from an already ostracized Bitcoin Cash community. This definitely does not make the BCH community look good in the eyes of the crypto world. Other people welcome this type of initiative, saying that they are operating fully within the limits and rules of cryptocurrency and that it is the free market at work.

In fact, some people on SharkPool’s Twitter page have participated in a poll asking the community which altcoin they should attack first. Litecoin won the first poll but I have not noticed any response or statement from the Litecoin community as to this threat. 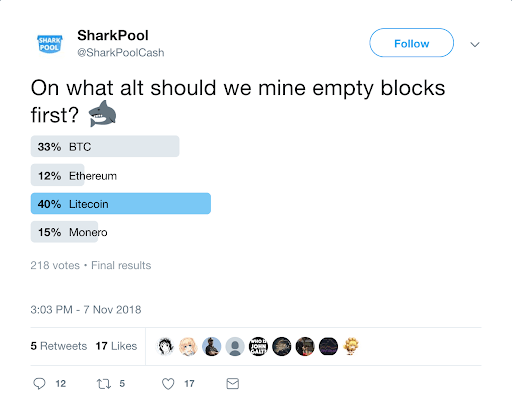 Many people actually like this idea because they argue that the crypto world is too saturated with shitcoins so this will be a way to expedite the deaths of those projects that deserve to die. We’ll be following along since we’re curious as to how this all pans out. Let us know what your thoughts are as to SharkPool though – we’d love to hear from you!