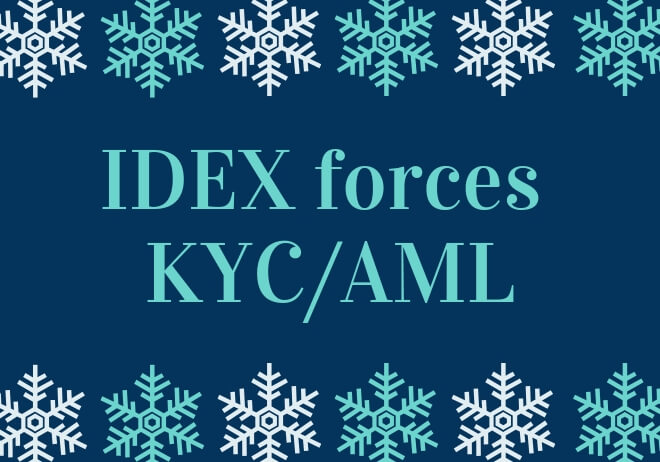 In a Medium article “Decentralized” exchange IDEX operator, Aurora Labs CEO Alex Wearn explained to its community that the exchange will fully enforce KYC/AML procedures for exchange users in order to comply with regulations. Also they have started to block IP addresses from New York (because of the Bit-License crypto companies need to have), in addition to North Korea and Iran that were already banned. So although IDEX was supposed to be a decentralized exchange, at least in the way it was perceived by the general public, these steps taken seem to illustrate that IDEX is taking a few crucial steps back from its initially outset roadmap towards decentralization? Was it even a decentralized exchange to begin with and why have these steps surprisingly been taken. Of course the crypto community looks at this with enormous amounts of suspicion, because this move of IDEX seems to be in the complete opposite direction of where core crypto enthusiasts want to go to.

Not so long ago another coin swap exchange that also didn’t require (verified) accounts, Shapeshift, notoriously announced that they too would implement KYC processes and comply with AML laws. As Shapeshift is a centralized company itself, their move, although undesired, can be fully understood as they don’t want to face company shut down or other regulatory issues. But as for IDEX, which was perceived as a decentralized exchange the situation comes more as a surprise. However, the explanation from their part is that because IDEX currently operates as a “pragmatic”, “hybrid” decentralized exchange and there is a company behind it and a visible team, due to these circumstances they are in fact in their current condition not censorship resistance and could face legal problems from regulators in the near future, as regulations and law enforcement are clearly coming towards the crypto industry. Because they weren’t yet fully decentralized to begin with, they had to face reality and act accordingly by taking these steps.

IDEX does run certain aspects via smart contracts on the blockchain, where matched orders are recorded, however for example the order book where traders submit their orders to, the order matching and the website itself, run on centralized servers and therefore are theoretically vulnerable to government censorship and shutdown. However these centralized aspects are currently needed for the exchange to have a more pleasant user experience than truly and fully decentralized exchanges would have. They state that this better user experience is vital for user adoption because fully decentralized exchanges would just not be able to compete with more centralized solutions. They further clarified that decentralization is not a matter of black and white, but there exist a whole spectrum in between, in which they need to find the right balance.

Another point that they made is that even if a decentralized exchange would be completely censorship resistant, a US CFTC commissioner had already mentioned that they could theoretically hold smart contract programmers liable for enabling illicit activity that could be expected to occur by using their code. Now although this is not quite yet the case, it could however illustrate how far regulators might be able to go in the future.

In their explanation IDEX explains that their goal is still to eventually achieve the end goal of ultimate decentralization and censorship resistance, however that the current reality of technology and regulatory environment have urged them to take this crucial steps back in order to be able to continue with operations in the foreseeable future, and simultaneously to be able to continue innovation.

They added that adding KYC also comes with some advantages to offset the disappointment, for example:

IDEX aims to keep the KYC process as frictionless as possible and they will have a multi-tier system in which small amounts require less identification than bigger amounts transacted on the platform.

Currently IDEX is ranked as the number 1 Dapp on the Ethereum blockchain with 4 times as many users as most popular decentralized gaming app CryptoKitties. However any Dapp can’t be truly a decentralized app if they are still operated on a website, by a company, with a visible team. In any such cases (which are practically all Dapps), they are not resistant to censorship.

Even though the move of IDEX is overall quite disappointing from the ideological standpoint on the crypto eco-system where decentralization is a key objective, on the other hand, following their justification, it seems all the more reasonable and realistic in the current environment of technology and regulations. IDEX hopes that in the future a new generation of regulators will understand that many of these restrictions they try to impose are based on outdated views on regulations. Until then, it might indeed be better to take an engaging position with these governmental entities to work to sensible regulations for the time being. It is now very clear though that KYC is now getting placed on so much cross points in the eco-system that even pseudonymity can’t be expected anymore almost. Hopefully the tide will change and we can get back on track towards the decentralized future that the crypto community is building on.

Not to be too much obstructed by regulators would however help to not stifle all innovation in a too early stage that we still are, which is a reasonable standpoint from the IDEX team.