Fakeout or Breakout? Why I think crypto will drop yet again! (Hint: Bakkt) 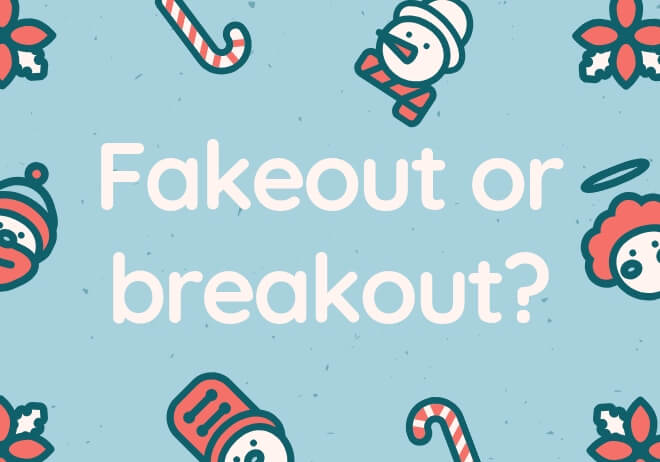 Merry Christmas and Happy Holidays, everyone! The crypto markets have been performing surprisingly well this past couple of weeks. During the last 7 days (at time of writing), BTC has gone up 15%, ETH has gone up 51%, XRP has gone up 26%, and BCH has gone up 103%. This price action was a huge welcome sight for the crypto community whose hopes and dreams have been battered for much of 2018. However, it’s a good idea to be cautiously optimistic and to dig into the possible reasons behind this recent move up. So let’s take a look!

First, it’s interesting to note that the traditional stock markets have been performing pretty bad the past few weeks. Due to events like the Federal Reserve rate hike, U.S. government shut down, trade wars, and more, the markets have experienced an unusually bad December. In fact, even the Nasdaq has officially dropped down into bear market territory. Some people speculate that since crypto markets moved in opposite directions from the stock market, it may suggest that investors moved their money out of stocks and into crypto. While that is an interesting theory, I personally doubt that they would move their money out of stocks and into something even more volatile if they’re trying to find a safe haven for their investments.

Second, some big names in the crypto world have called the market bottom, such as Joseph Lubin, founder of Consensys and co-founder of Ethereum. If this in fact turns out to be the bottom, he would have had eerily good timing, but I wouldn’t read too much into predictions from figureheads. After all Mike Novogratz and others called the bottom a few weeks ago before prices proceeded to drop even further. Somewhat outside the crypto world though, a famous trader who shorted Bitcoin near the top has officially closed his short position. He has stated that he will never go long on Bitcoin but just the fact that he closed his short is interesting and could potentially mean were close to the bottom.

Third, another theory for the price bounce back is the fact that the year is almost over, so traders who wanted to play it safe with wash-trading rules are likely to buy back into their positions now. Wash trading rules for traditional markets means that if you want to sell your stocks to lock in capital losses, you have to wait at least 30 days before you can buy back into your position. That means that a lot of people likely would have sold late November and could just start buying back in now at the end of December.

Why I don’t think the bear market is over

All of this is great, but in my opinion, the bear market isn’t over yet. Just purely in terms of charts, we haven’t seen a super clean capitulation signal yet where it drops heavily fast and then bounces back up fast. Another option is a super long and rounded bottom – this of course is not preferred for us because that means the bear market still has several months to go. All of this may seem arbitrary, but it’s based on studies of market bottoms that encompass decades worth of historical data (for other assets of course). For more info on capitulation, I encourage you to watch our Capitulation Explanation video.

One big reason I think prices will drop again is because of Bakkt. On the highest level, Bakkt is building a global infrastructure that will help improve Bitcoin adoption. People are excited because this would make it easier for institutions to participate in the Bitcoin/crypto world. For more info on Bakkt, please check out our Bakkt for Beginners video.

Bakkt was originally supposed to be launched on Dec. 12, 2018. However, they were delayed because of the CFTC approval process requiring longer than originally predicted. The general consensus is that they have a decent chance for approval, but the new timeline is quite interesting. The Bakkt CEO announced in late November that the new launch date would be January 24th, 2019.

However, because of how the CFTC approval process is structured, the new launch date seems likely to be delayed again. That’s because the request was recently forwarded to the commission, in which they allow a 30 day period for public comments. They then need a few days to read the comments before they make their final decision. Since the 24th and 25th are federal holidays, the earliest they would start the clock for public comment is the 26th. Not to mention the U.S. government is currently shutdown so that may affect the initialization of the comment period too. Now the delay may only be a few days, like Jan 30th 2019, but regardless, it seems inevitable given the circumstances.

So if there’s another delay, which is looking super likely, the crypto markets will likely drop yet again. After all the previous delay announcement did the same as seen in the charts below. It’s not only Bakkt though – all the numerous Bitcoin ETF delays and rejections by the SEC also dipped the crypto markets around each announcement.

This is why I don’t think we’re in the clear yet. Even though I’m really happy about this recent increase in the prices, I think we’re due for at least another significant retrace. Of course I’d love for this to be the bottom already and for us to be on our way to another massive bull run. But as traders/investors, we must consider all facts and possibilities and just be ready so we can trade/invest responsibly as always.

Anyways, those are just my thoughts, as always let me know if you agree or disagree and I want to wish you all a Merry Christmas/Happy Holidays!