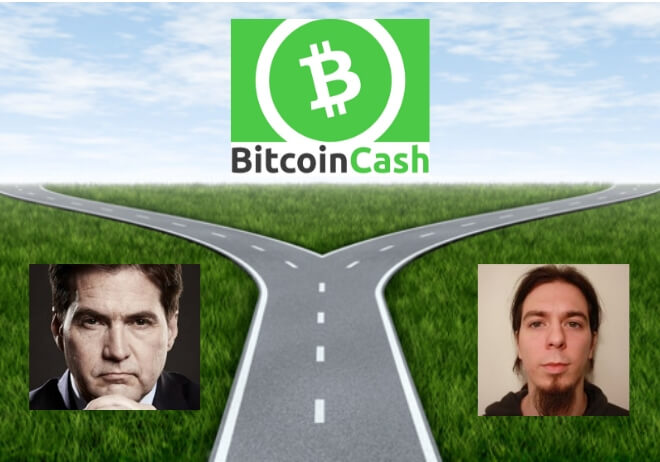 A couple of months ago we published an explainer video on Youtube about the controversy around the upcoming hard fork around the 15th of November. Now that date is approaching several major parties have spoken out which version they will support. Other than that the markets seem to be reacting on the upcoming fork, BCH surged 27% to $542 at its top in just a matter of a few days. Potentially investors are anticipating the controversial hard fork to result in a chain split, that will lead BCH holders to get free coins in the new chain.

(If you need to read more about the differences between Bitcoin (BTC) and Bitcoin Cash (BCH) and how Bitcoin Cash came into existence, please read our explainer article for a better background understanding)

In the past on controversial hard forks, the chain splits that occurred indeed investors would get free extra coins in the forked chain. And in many cases those got a value when the new chain got mining support and the coins were listed on exchanges. So what is the case this time around?

The original developers team, Bitcoin ABC, that forked Bitcoin Cash from Bitcoin (BTC) has performed network upgrades by means of hard forks roughly every 6 months. Up until now those were without controversy within the community, so they were able to hard fork without chain splits to occur (a chain split occurs when part of the network decides NOT to implement the upgrade and/or to implement its own upgrade and part of the miners decide to start mining that version of the network as well, keeping the chain alive by producing blocks). However with the upcoming hard fork of November 2018 things are different: the company nChain (from Craig Wright, also known as Fake-Satoshi) disagrees with the ABC upgrades and decided to come with its own version, called Satoshi’s Vision. Influential mining pool Coingeeks backs Wright’s implementation and has announced it will mine that version of the hard fork. Meanwhile, Bitcoin Cash’s main evangelist, Bitcoin.com CEO Roger Ver, had in the time not explicitly announced which side he would support. Bitcoin.com is a promotional website for Bitcoin Cash (BCH) and also operates a mining pool, so Roger Ver’s decision could make a big difference.

All and all now the hard fork date is approaching, several large parties have announced their BCH fork support, that suggest that the favor is for the Bitcoin ABC implementation. Bitcoin.com announced this very clearly and also Binance made an announcement. Although Binance didn’t directly state that they would support the ABC roadmap implementation, the link to the bitcoincash.org roadmap suggests that it is in fact the chain they choose.

Just recently also Coinbase announced that they will support the BCH hard fork ABC implementation. It is important for users to understand that on the 15th of November these exchanges will suspend deposits and withdrawals of Bitcoin Cash in order to perform snapshots and to wait until after the upgrade until the network is deemed stable and secure enough, before enabling deposits and withdrawals again.

Assuming that nChain will still go through with their implementation and the fact that a big mining pool, Coingeeks, will actually mine their version (“Satoshi’s Vision”), we can assume that there will emerge a new coin from that hard fork. If indeed exchanges start to list it and is being traded, this might lead to free coins for anyone holding BCH in their wallet at the time of the fork. This is potentially what the investors are hoping for, resulting in the strong “buy the rumor” increase in BCH price. Keep in mind though, that holding BCH on an exchange does not give you the “right” to receive “Satoshi’s Vision” coins as well; this is only the case if an exchange has explicitly announced to credit these coins after the hard fork (so far there have not been such explicit announcements by exchanges).

As a general reminder: it is usually not recommendable to perform on-chain transactions during a hard fork. Wait until it is absolutely made clear that the network is stable and secure before executing transactions. If there is a chain split and you would like to move the coins from the other chain, make sure you read all about the procedures to do so safely and securely. Also keep in mind that scammers are usually very active around that time with various phishing attempts. Also after big price increases due to fork news and rumors, after the fork hype is over and/or after the fork is completed, the price usually has a high probability (but not guaranteed, as this also not investment advice) of correcting back to its pre-hype price level. This is called the “buy the rumor, sell the news”-effect. Anyway, stay safe out there and make sure that you only act under these circumstances if you absolutely know what you are doing!