Coins vs Tokens: Key Differences Between Coins And Tokens

There are many definitions and words that have emerged to describe the crypto space. Beginning with Bitcoin, this digital currency gave birth to the boom of over 1000 altcoins and tokens. The term cryptocurrency or crypto is a broad categorization that describes digital currencies, digital assets, coins, and tokens. However, “cryptocurrency” is not always the most accurate term used as some coins and tokens are not a currency per se, but a digital asset with utility other than a store of value. Under the general term of “cryptocurrency”, let’s explore the differences between coins vs. tokens and take a deeper dive into the topic of digital assets.

As we mentioned earlier, any coin other than Bitcoin is referred to as an altcoin, which stands for “alternative coins.”  The functionality, use cases, protocol, community, and other attributes of altcoins can vary greatly from those of Bitcoin. For example, some altcoins are also tokens, meaning that they exist on another blockchain platform, rather than having their own blockchain.

Many altcoins are actually based on the Bitcoin protocol, but their developers decided to make a new cryptocurrency with some adjustments or technical innovations. For example, altcoins like Monero, Dash, and Zcash use special techniques to enhance privacy and anonymity but are run on the Blockchain platform.

In some instances, people have decided to make their own version of Bitcoin by means of a chain split, also known as a fork. There have been many forks in the past, but 2017 was a year of high-profile Bitcoin chain splits: Bitcoin Cash, Bitcoin Gold, etc. Some of the resulting currencies have become pretty valuable in their own right, and many other blockchain teams have followed this lead and turned to forks as a way to raise funds. These Bitcoin spin-offs are also referred to as altcoins.

“Altcoins” and “coins” are used interchangeably in the community. Bitcoin is a coin, and any coin other than Bitcoin is considered an altcoin, even the so-called tokens! But essentially, “coins” have their own independent blockchain where their own transactions live. Any Bitcoin fork or any coin derived from the Bitcoin protocol is considered a(n) (alt)coin.  For example Litecoin is not operating on the same blockchain as Bitcoin, making it a coin operating on its own independent blockchain. Bitcoin Cash is a so-called fork of Bitcoin, which means until the chain split that gave birth to Bitcoin Cash they share the same transaction history, but since the fork they are both independent blockchains. But there are also coins that have a completely different protocol than Bitcoin’s such as Ethereum.

Examples of a few different types of altcoins include:

Tokens, on the other hand, are a particular asset or utility that lives on top of another blockchain. For example, ERC20 tokens, such as OmiseGo, SALT, Augar, Civic, and others, are all tokens that “piggyback” on the Ethereum blockchain. They are hosted by Ethereum addresses and sent by Ethereum transactions.

Tokens can represent any type of digital or even physical asset that is tradeable and are created on top of a blockchain that facilitates the creation of decentralized applications, rather than their independent blockchain. This makes them easier to create as well since you do not have to build a brand new blockchain.

Some projects that now have tokens on another blockchain are working on their own mainnet, which means in the future they will have their own blockchain with their own native coin. Current holders of the tokens would then usually be able to swap their tokens for the new coin by then. 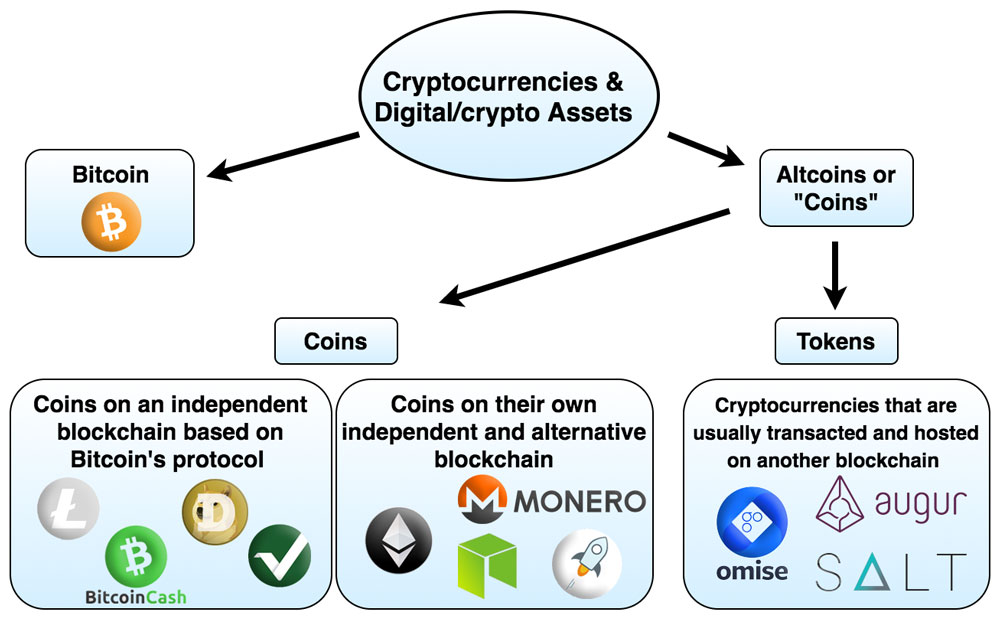 Should I Invest in Altcoins?

Whether or not you want to invest in an altcoin depends on your personal objectives. Because there are so many, with new ones created every day, many people are understandably skeptical about altcoins. It is a common understanding that the vast majority of altcoins will fail in the near future, but some do make spectacular gains. Investing in altcoins can be rewarding, but in general very risky. Coins with small market capitalization and trade volume are often targeted by pump&dump groups that artificially inflate prices to draw in new investors (pump), and then dump the coin while prices are high. Furthermore, many altcoins are scams and some even pyramid schemes.

Therefore, the following is universally recommended if you are considering investing in altcoins:

Although we don’t provide investment advice in any shape or form, we do not recommend investing in altcoins or ICOs before you have a little more general knowledge and experience in cryptocurrencies. These investments are inherently more risky and can lead to huge losses, even if you know what you are doing. Altcoins generally tend to have higher gains than Bitcoin when the market goes up, BUT they also usually have the highest losses compared to Bitcoin when the market goes down, plus a higher risk of total failure/loss (the smaller the altcoin, the higher the risk). If you take your time to learn, you might stand to make a lot of more money in the future. Be like the tortoise: slow and steady wins the race.

If you have your eyes set on an altcoin, it is time to figure out where and how to buy it. Websites like CoinMarketCap allow you to find the price of the altcoin, which exchanges it is traded on, and which coins you can buy it with (known as a trading pair). To use  CoinMarketCap: click on your desired altcoin, click the “Markets” tab above the chart, and a list of exchanges and trading pairs will appear!

A few altcoins are tradable on certain exchanges directly against fiat currency or USD Tether, which is a cryptocurrency that is supposed to be pegged 1:1 to USD (this is a controversial issue, because there are no official audits that prove the backing by real USD; see our article What is Tether). This only applies to a small selection of the most popular altcoins though,  and only at certain exchanges. The majority of altcoins must be bought with Bitcoin or Ethereum. In those cases, you will need to buy one of those, dependent on available trading pairs for your altcoin of choice, and then send that to the exchange where your desired altcoin is listed. You can then use your Bitcoin or Ethereum to buy the altcoin.