Many beginners come across crypto investment programs like Bitconnect and USI-Tech and wonder whether or not to get involved. Here at Bitcoin for Beginners, we think they are Ponzi schemes and you should stay far away. Instead of diving into the details of why we think these programs are unsustainable, we will cover just the highlights, but if you want more information we highly recommend doing some more in-depth research before investing.

These programs are considered high-yield investment programs (HYIP), promising consistent, high returns on your initial investment. Common features include a lending component with a lock-up period, target price predictions, and a multi-level or affiliate marketing program. HYIP programs are nothing new to the world of investments, but only recently have they started being applied to cryptocurrencies. However, because crypto transactions are anonymous and irreversible it is exceedingly easy for scammers to accept your funds, and then disappear.

General structure of these programs

Many of these programs are just clones of each other, and some of them (like BitPetite and Aurora Mine) have already shut down. Other programs include RegalCoin, HextraCoin, Gold Rewards, ETHConnect, etc. In fact, a quick internet search shows that there are companies selling HYIP website templates and software. With these developments, it has become exceedingly easy for scammers to spin these up, collect your coins, and disappear with a fortune.

Bitconnect and USI-Tech are structured in a way that enables them to last longer than other programs, but we believe that they will eventually topple as well. But you don’t need to take our word for it, check out what Vitalik Buterin (founder of Ethereum), Charlie Lee (founder of Litecoin), Michael Novogratz (billionaire hedge fund manager), and Ari Paul (CIO of BlockTower Capital), said about Bitconnect:

We also want to stress that just because you successfully made money from a program, does not mean it is legitimate. Bernie Madoff’s initial investors made a fortune and everyone was happy… until the whole thing collapsed. These programs do not have a net-positive outcome even if a few individuals make a ton of money; people who join later are inevitably going to lose. We don’t recommend even giving these programs the time of day.

A lot has happened in the Crypto world since we first published this article. On January 16, 2018 the long expected and inevitable collapse of Bitconnect finally came about, confirming the outcome that we for long have warned about within our communities. Many members who supported Bitconnect were defending the program and were saying that it all wasn’t true what we claimed about this program and that it wasn’t a Ponzi scheme. Very unfortunate for many of them, but a lot must have lost considerable amounts of money and so did the people they signed up under them in the Bitconnect pyramid. After Bitconnect announced that they would shut down their lending program, for most people the exchange couldn’t be accessed and many people didn’t get their Bitconnect coins (locked in the lending program) back in time to be able to sell at any reasonable price. On other exchanges where Bitconnect was traded, the price went into a free fall of more than 90% within a matter of hours. Just to show readers the eventual fate of near every lending program, we have included the chart of Bitconnect from the period before until after the shutdown, so you can visualize the certain future of any other coin with similar characteristics: 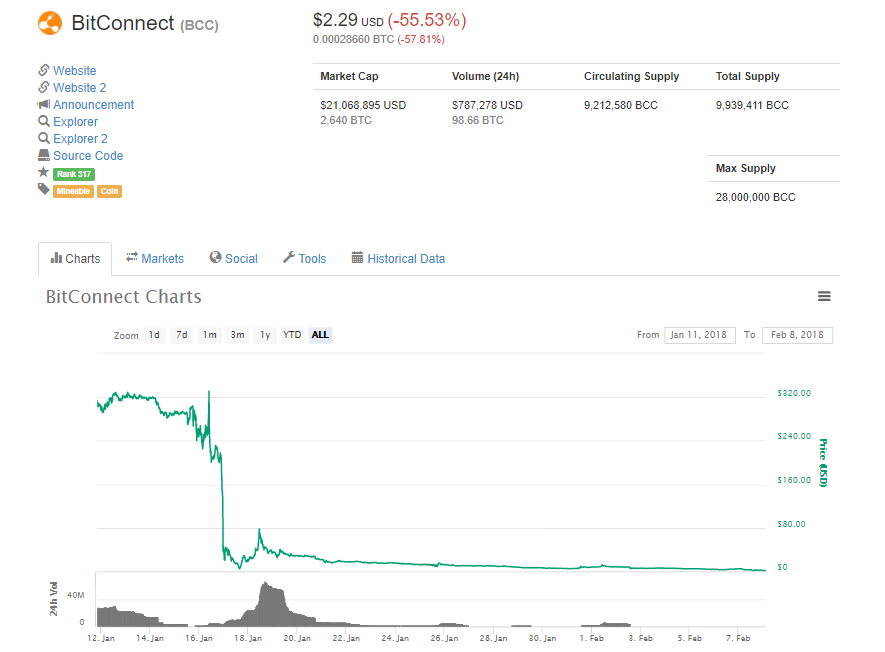 Not long after the shut down of Bitconnect, another lending program coin named Davor Coin also exit scammed and people were unable to withdraw their funds. In the following chart you can see how the price of that coin ended up: 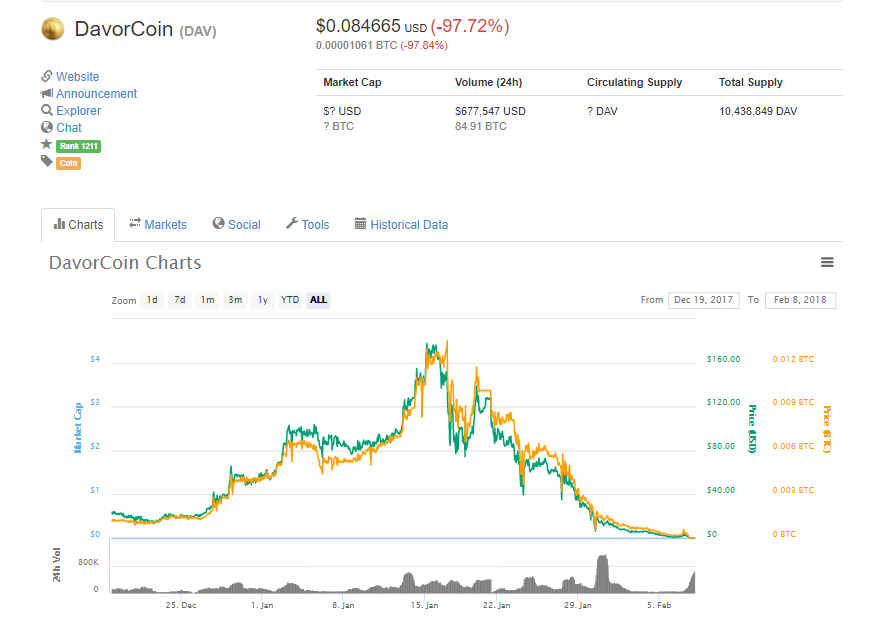 The problem with these programs is that you don’t know when they will shut down, it can take days, weeks, in some cases months. In the end, it will all look like the charts above. The moment they shut down, it will be unexpected and when your coins are locked in the lending platform, you won’t be able to access them, withdraw them nor sell them before it drops to near zero territories. This is why we consider this a risk not worth taking, especially because there are many other solid investments out there as well. Also you don’t want the people signing up under you in the multi-level marketing bonus referral programs (which could be your friends or family) to be left holding the bags. Be careful and stay safe out there, because there are a lot of scammers out there trying to get your money or coins. Also please read our broader article on Crypto scams and their red flags.