What is the difference between Bitcoin and Bitcoin Cash?

These days, everyone has heard of Bitcoin. But if you have done a bit more research into cryptocurrencies, you have also probably come across a popular coin called Bitcoin Cash. If you are wondering what makes them different, read on!

How Bitcoin Cash Was Developed

Bitcoin was invented way back in 2009, and for years the crypto community was perfectly happy with the protocol that governs the network. But as its popularity grew, transaction times and fees began to increase, and the community of users grew unsatisfied.

In 2015, a debate started about how to continue to scale Bitcoin as it gained popularity. For years, block size went up as usage went up, but everyone knew that there was a hard-coded 1mb cap built into the Bitcoin Core software.

Some Core developers (Gavin Andresen, Mike Hearn, Andrew Stone and [at the time] Adam Back) believed that eventually a move to 2mb blocks and greater could happen slowly to maintain speed and low-cost transactions key in worldwide adoption. And other Core developers (Peter Todd, Pieter Wiulle, Gregory Maxwell, Jameson Lopp) believed that the 1mb hard block size limit was important so that people running original Bitcoin nodes could run them in perpetuity – stating that distributed full nodes were key to decentralization.

In 2015, Bitcoin XT started running their software on the Bitcoin Network allowing 2mb blocks to run. Initially popular, a debate arose and many prominent “small blockers” started saying that bitcoin processed by XT nodes were “alt-coins” and a PR-war started. Similarly in 2016 Bitcoin Unlimited and Bitcoin Classic experienced the same basic treatment with their 8mb blocks. To this day, XT and Unlimited can still process non-Segwit bitcoins on the BTC network, but both primarily support the BCH chain.

Amid the debate, employees from the newly formed Blockstream Corporation (including Adam Back) announced that Pieter Wuille had created Segwit as part of the upgrade path for Bitcoin. Lightning Network would be the next step for followers of the Bitcoin Core implementation, and Segwit would activate on the 1st of August 2017 with acceptance of a block size increase to 2MB in November 2017 so that big blockers and small blockers could remain a community of compromise.

Blockstream’s olive branch of B2X and other decisions hammered out at the “New York Agreement” seemed to keep things together in the center, but there were members of the Core community who staunchly believed in the absolutism of 1MB blocks, and there were members of the ABC (Adaptable Blocksize Limit) community who believed that a minimum upgrade to 8mb block size was the only way to deal with the incoming surge of new users to Bitcoin in 2017.

Ultimately, the ABC community rejected Segwit entirely. On August 1st, 2017, they split off when Segwit was activated on the main bitcoin (BTC) chain and continued on their own version of the bitcoin chain which then became known as the Bitcoin Cash chain. Bitcoin Cash therefore has the same transaction history as the original BTC chain until the chain split. Every one that had BTC in their wallets, on the time of the chain split now also had the same amount of BTC in the wallet addresses on the Bitcoin Cash chain, which were the identical addresses with the same private keys to control them.

Bitcoin XT, Bitcoin Unlimited and Bitcoin Classic joined the developers from Bitcoin ABC and consolidated their nodes to accept bigger blocks (8 MB) that would be mined on a chain that hard forked (UAHF) from the Bitcoin code using the same mining and signature standards that had been used since the beginning but with new node implementations.

The Bitcoin Core team activated UASF, Segwit, and continued along with the 1MB block size limit, (and later in November deciding not to upgrade the block size limit) but rather to use a new signature standard (Segwit) and new mining incentives while keeping the original node implementations that had been used since the beginning. This was to be sure that no original nodes would be kicked off the network.

After the emergence of Bitcoin Cash, we saw the entrance of figures like Roger Ver on the BCH side (he was an early supporter of Bitcoin BTC), and the debates started to heat up about which chain should justly be called the real “Bitcoin” and subsequently use the ticker BTC (or XBT). One of the metrics though on which many involved parties announced to determine which would considered to be the real bitcoin, was going to be the chain that kept the highest mining power.

In the year since, BTC hit a $20k all time high, has seen Segwit proliferation, a series of new hard fork coins from the network and lots of proactive development of the Lightning Network, as well as establishing itself as the chain with higher hashing power and longer proof of work – maintaining the name and ticker of Bitcoin.

Meanwhile, BCH decided to focus on business integrations and the “cash” use-case; adding developers from nChain, Lokad, BitPrim, BitPay, Purse, Yours and lots of independent start-ups looking to take advantage of big blocks. BCH has also done a major network upgrade to run 32mb blocks and the re-activation of OP codes has allowed for the simple launch of on-chain social networks and tokenization/smart contract layers.

For the time being, both chains remain politically heated, but are clearly going their separate ways with a focus on their use-case-of-choice.

Differences Between Bitcoin and Bitcoin Cash

Here’s an infographic to further illustrate the differences between Bitcoin and Bitcoin Cash. 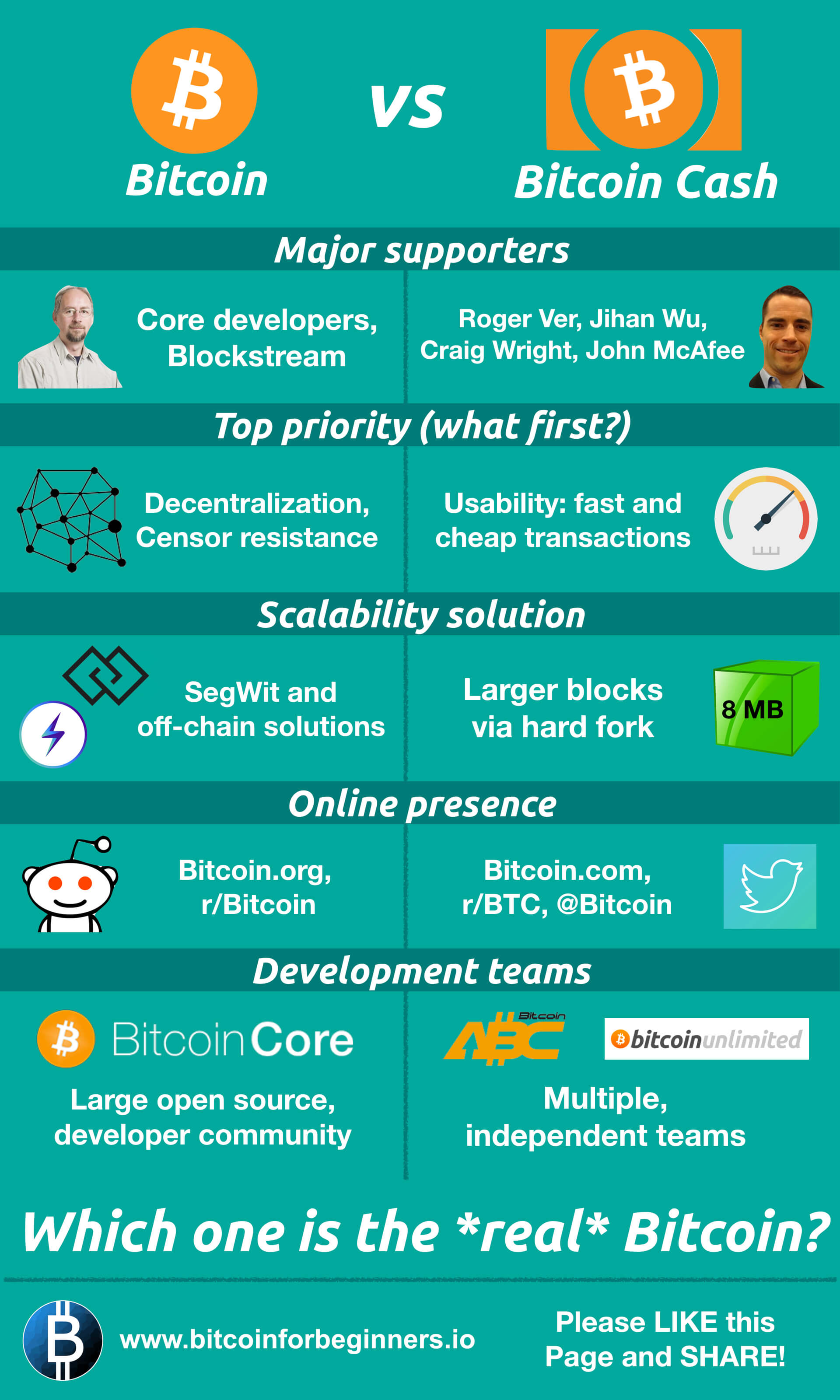 Note that nowadays the blocksize of Bitcoin Cash (BCH) is 32 MB and not 8 MB anymore.

What is the difference between BTC and XBT?

Nothing — they are both used as a ticker symbol for Bitcoin.  The reason XBT is used is that according to an international currency naming convention called ISO 4217.  According to that standard, BTC could not be used because that would indicate it is the national currency of Bhutan.  So some entities have chosen to use XBT instead.

What is the difference between BCH and BCC?

Again, there is no difference.  While the official ticker symbol is BCH, BCC is used in many Asian markets and on some exchanges. However the now failed scam coin Bitconnect was referred to as BCC as well, so it’s preferable to use BCH for describing Bitcoin Cash to avoid confusion. (Bitconnect (BCC) is now delisted from all (major) exchanges, so the risk of accidentally buying the wrong coin (Bitconnect instead of Bitcoin Cash) is now not an issue anymore)

Bitcoin.com is a website which touts itself as “your premier source for everything Bitcoin related.”  The site lists exchanges for buying Bitcoin, provides news and hosts a community forum. Interestingly, the site’s CEO is Roger Ver, one of the main supporters of Bitcoin Cash. Visitors of this website should therefore be aware of the fact that the site at instances can be biased in the belief that BCH is the “real” Bitcoin. This may sometimes add to the confusion in the learning process of beginners.

In general it needs to be noted that even more than a year after the Bitcoin Cash hard fork (chain split) both the BTC and BCH camps are passionate opponents and attack each other viciously online in discussions. Both camps genuinely believe that their version is the “real” bitcoin and that the other camp is trying to hijack bitcoin for malicious reasons and both come with arguments that support their claims and why they are right and the other is wrong and will fail. What is the “real” bitcoin and which “bitcoin” will ultimately be the one that prevails? In 2018 the odds seem to be in favor of bitcoin BTC, but if that balance stays that way is up to the individual investor to estimate.